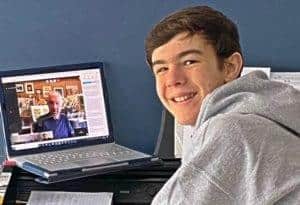 Last Monday I was really excited to be able to take part in an online Q&A session with the writer of Blood Brothers, Willy Russell. We are studying this brilliant play, which is one of the longest running musicals in West End history, as part of our GCSE drama course. Willy is a world famous, award winning playwright, author and composer who also wrote Educating Rita and Shirley Valentine, which were then made into blockbuster movies.

I had the opportunity to ask Willy a question of my own. The question I asked was ‘Do you tackle things differently when you are writing music/scores compared to a book, script or a play?’ After joking with me about what I like to be called; saying that he preferred Billy/Willy to William as a child, he gave me a really thorough answer explaining that writing music & lyrics is a different form of writing, but that he always loves to compose. As he thinks of lyrics, he jots them down and carries them around in a bag ready to use alongside new compositions, whenever required. This was the case with the song ‘Easy Terms’ in Blood Brothers.

Many other questions were asked covering different aspects of the Blood Brothers story and characters. One I found really interesting asked about the identity of the narrator. People have their own interpretations and Willy Russell found it fascinating that people often look very deeply into this character, deeper than he imagined when he wrote it. The narrator was in fact based on a poet who lived in the area and knew the story of the twins. I’ve never really worked out who the narrator was, so I found his answer very helpful.

Another question asked about research undertaken prior to writing. It was interesting that Willy Russell does not do this but bases his work on existing experience and knowledge. If he doesn’t know about something, he generally doesn’t use it but occasionally will go back and retrospectively research if required, just to double check the facts. His view is that to stop and undertake research can interrupt the flow of writing. I think this is part of the reason his work is so authentic.

A recording of all the questions and answers will soon be made available for everyone to access.

The Q&A was set up by Stage-ed and Bloomsbury Publishing and places were limited with only three teachers and one pupil being selected to ask the live questions directly to Willy Russell in person. I was lucky enough to be that one pupil and I am so grateful for the experience. Willy Russell was so easy to talk to and gave such full and thorough answers to everything he was asked.

The recording will be shared with hundreds of drama teachers and their pupils across the country. It was brilliant to be involved in this project and to be able to chat to someone who is so experienced, knowledgeable and successful in the industry that I aim to one day work in.